For a full year now, choral institutions have been either thriving or surviving in the midst of the online regimen forced upon the world of performing arts.

Choral groups have faced a unique challenge in figuring out how to transfer one of the most complicated and multifarious instruments—the voice—into the two-dimensional spaces of the digital realm. As an instrument, the voice is capable of some impressive sonic gymnastics. It has the ability to move from high-pitched warbles to bass rumblings, to create sounds sharp and direct, and then as quick as a breath recedes into a controlled whisper. We might go so far as to characterize the voice as less a solo instrument than it is a small orchestra, playing in the resonant halls of our diaphragm and skull. Add to this the fact that we often use our voices in harmony and rhythm with the voices of others, and it starts to become clear just how astonishing the work of a tight choral ensemble really is.

The realm of virtual music-making has added a whole new set of sonic permutations to choral singing. While some choral groups have either balked at the challenge (or simply do not have access to the right people and resources to meet the challenges head-on), others are eager to translate the versatility of the voice through a new, exotic medium and push the boundaries of what choral music can be in the 21st century.

“There is quite a level of nuance in how choral groups are approaching singing during this time. All across the country groups are coming up with interesting and novel things to do.”

This is the analysis of Winnipeg-born conductor John Wiens, who is a leader and advocate when it comes to pushing the sonic boundaries of choral performance.

“The progressive groups of today are embracing digital possibilities. There is room, now, for a series of compositions that are written specifically for digital content. The real opportunity as a creative is trying to find ways to write pieces that will embrace the randomness of Zoom—because let’s be honest, voices don’t line up when they’re singing on Zoom!”

For Wiens, the hot opportunity for the choral community is the digital medium itself.

“We’re choral organizations, and we’re spending heaps of money on video and audio engineers. This is fine, but if we want to help sustain our singers we have to be willing to reverse engineer and consider what a successful performance in COVID times really is. It’s experimental.

Wiens cites the “car choir” solution, John Newman’s idea for a kind of drive-in choral concert involving FM transmitters, as one kind of choral innovation that has come out of the pandemic.

“Certainly, many new ideas have developed in the past year. David Newman’s “car choir” is one example of an idea that has developed a life of its own. It is very interesting and different! The fact that there are all these new ideas and capacities, and ways of trying to get through a crisis, is a very positive thing.”

In his own musical projects, Wiens is interested in fusing early Renaissance choral music with contemporary choral styles using a virtual space. His latest project is a collaboration with Camerata Nova on a fresh rendering of ‘Gloria,’ a piece of early music by Renaissance composer Leonel Power.

“This piece specifically fits what I would like to experiment with. It’s written for two unequal voices, in duet, with a third voice that sings a very predictable cantus firmus (which is a tune that everyone recognizes). So you’ve got these two voices singing in a kind of quasi-improvisational fashion over this cantus firmus. I think it’s some of the most virtuous singing you’ll find in Renaissance music. It lends itself well to what I want to try and do with it because I want to try and build a sound world that links early music with contemporary music. I’ve no idea how successful I’ll be at this, as I’ve never tried it before! And, that’s one of the great things about Camerata Nova. They’ll almost always say yes to your wild ideas!”

With this project, Wiens is attempting to meet the digital format in a way that’s progressive and also showcases the inherent freshness and exoticism of the early music genre.

“We really miss this sense of how innovative early music actually is. There is a bookish attitude that has settled around the genre. And I suppose there almost has to be because you have to read treatises and manuals in order to understand this music. That said, every time I sit down with a piece of early music, I feel how out of the ordinary this music really truly is. It’s not a surprise that contemporary composers today draw on the influence of these earlier works. Many contemporary composers—especially those who write choir—frequently listen to and are heavily influenced by Renaissance music. I think that this parallel gets lost, and this has always puzzled me. Oftentimes we see contemporary concerts treated with an outstanding visual component, but not the same treatment is given to performances of early music. We’ve got these two languages that are very similar, linked in many ways, and both contemporary in similar ways. But the level of freshness and newness in early music is just as present as it is in contemporary music.”

Wiens’ perspective, though fresh in the 21st century, harkens back to the Medieval folk rock movement of the early 1970s. Growing out of England and Germany, this movement saw European rock groups incorporating musical styles from the medieval, renaissance, and baroque eras into their work. Right around the time that the Velvet Underground were closing the gap between rock and avant-garde music and Brian Eno was acquiring his pop celebrity, groups like London’s Gryphon and Gentle Giant were moving “backward” on the trajectory of classical music genres, incorporating multi-instrumental band members who would play the clavichord, harpsichord, violin, and recorder. This subgenre movement of medieval/renaissance rock music lasted maybe a decade, but Wiens’ enthusiasm for the fusion of renaissance and contemporary styles of music is reminiscent of these earlier “punk” attitudes from the Euro-rock scene. Obviously, Wiens is not the lead singer or guitarist of a rock group—he’s the conductor of a choral ensemble. But now in 2021, we have the means to imagine these different types of musical artists and genres as not so different from one another—means such as the world of digital possibilities. You could almost go so far as to say: the cloud is the limit.

In collaboration with Camerata Nova, recording and filming started on  ‘Gloria’ during the first week of April, at the St. Norbert Arts Centre in St. Norbert, Winnipeg. The recording, and video component, will feature sopranos Sarah Clefstad and Merina Dobson-Perry.

Stay tuned for the release! 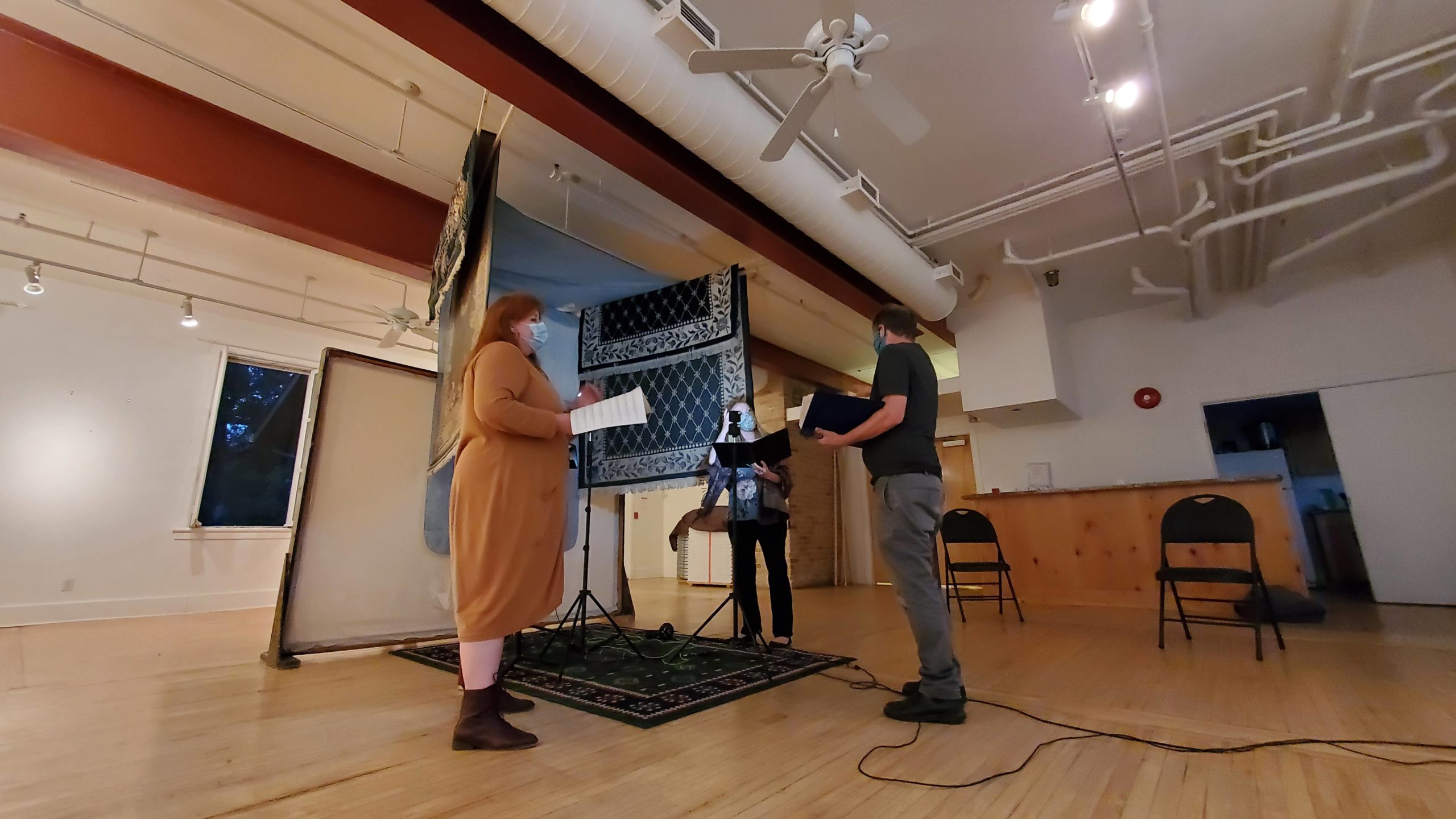